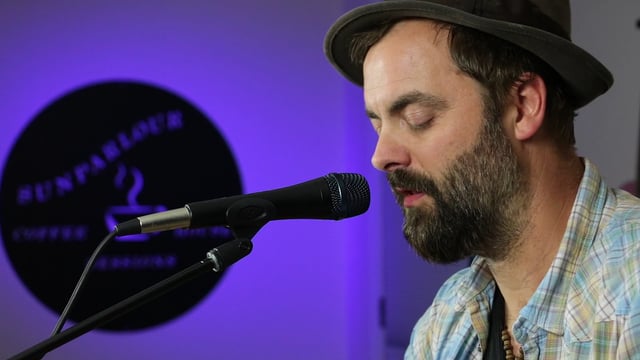 As a young teenager, Fraser Anderson witnessed the tragic death of a wonderful man he had met only hours before, to whom he spoke about the profundities of life and death. At a loss as to how to process the extremity of the experience, he took to writing – at first poetry, then lyrics and songs. His musical influences are broad, experimenting early as a teenage jazz-fusion hip-hop performer, drummer, keyboardist and bassist. Soon after graduating from music college, Anderson was spotted by Scottish folk icon Dougie McLean, who invited him into the folk world.

Fraser Anderson recorded his first album, ‘And The Girl With The Strawberry…’ in his friend’s bedroom, and which his local newspaper proclaimed “a masterpiece of a debut album”. Anderson then moved to rural France, where he lived and raised his family for many years. In between labouring jobs, he penned songs and performed at local village concerts, to a community that adored him and his music. That support would soon propel him to launch his second studio album, ‘Coming Up For Air’, and tour across the European continent. His loyal international fanbase was confirmed by two successful crowdfunding campaigns that funded his third album, ‘Little Glass Box’, and the latest album, ‘Under The Cover Of Lightness’.

Fraser Anderson returned to the UK in 2013, making the musically diverse and vibrant city of Bristol his new home.

About 7 months ago via SocialBee.io v2

About 10 months ago via SocialBee.io v2